The Possession War: A look at the Habs Inside Game

How on earth does a 23rd ranked offense warrant a 37-15-4 record? Well, it sure isn’t because of the power play; the Canadiens offensive crutch of choice for almost 20 years. Even for the last 10 years, the Habs trail only the San Jose Sharks by just 0.19% for being the most PP dependent team in the NHL for creating offense. That means their even strength game, and 5v5 in particular, has been brutal for a very, very long time while teams who’ve been rather good at it have been winning Stanley Cups.

Before I get to the current season, historical context is needed because the Habs even strength problems have been an organizational issue spanning multiple coaches and GMs. As you can see in the chart below, the Canadiens haven’t been able to string together positive EV scoring differential seasons since 1997… that is, until Marc Bergevin & Michel Therrien arrived in Montreal. And for the few Jacques Martin defenders still hanging on, take a close look at his era of “possession hockey”. 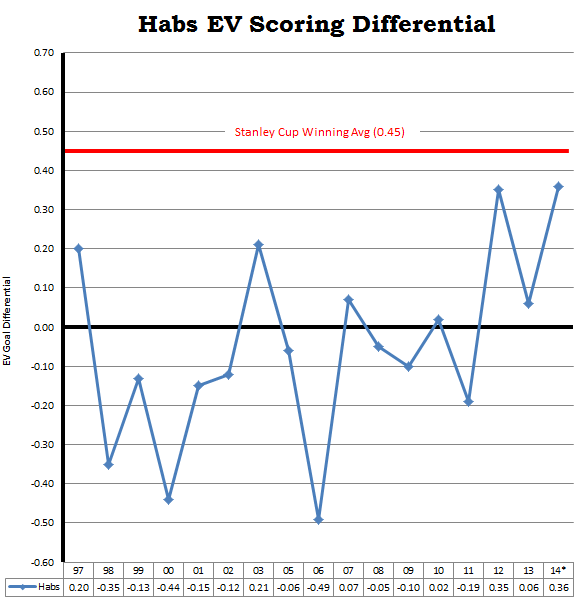 Say what you will about Therrien and the Habs front office , it’s important to look at where the Habs EV game needs to be, compared to the teams winning Stanley Cups. Sure, it should be blatantly obvious there’s a lot of work to be done before anyone can seriously call them “Contenders” but there is much to like in their upward EV trend, by Canadiens standards anyway. It’s worth noting that as of December 9th last season, the Habs had a +.23 EV scoring differential so much of the slide (still ended in positive territory) can be attributed to the Carey Price’s knee problems in the second half of the season.

So the Habs record and positive EV differential baby steps is all because of Carey Price? Well, yes and no. Stéphane Waite wholeheartedly deserves a lot of credit for his work with Price but the answer isn’t as simple as that, and that’s what this story is really about.

In a fluid, team sport it’s easy to focus on one thing for a simple answer as to why things are the way they are. What I wanted to do was drill down and look at both sides of the puck, where EV goals are being scored… or not. What’s happening with 25 feet of the net where two thirds of all 5v5 goals are scored and beyond, where Price recently referred to distance shots as “cosmetic a lot of the time”.

Last season, NHL goaltenders averaged a .960 SA% on 21.4 unblocked 5v5 shot attempts per game beyond 25 feet and had a .923 SA% killing penalties on 4.3 attempts. Within 25 feet, the SA% dropped to just .855 on 10.8 attempts 5v5 and .804 on 2.6 attempts killing penalties. Easy to see why heat maps tend to glow in tight. Of course, getting there with regularity and producing on those limited chances is far easier said than done but doing it better than your opposition is how you win more hockey games over time.

Puck possession just for the sake of it means little in a game of small percentages if you aren’t generating quality offensive pressure with the puck time you do have. By breaking down the real-time scoring data from games, it’s possible to generate a Fenwick% to see what the battle looks like where most of 5v5 goals are being scored.

A couple weeks ago, the Habs were supposedly the 5th best team in the NHL at puck possession time, yet after 56 games, they actually have a 48.4 Fen% in tight 5v5 and are only 47.1% on the road. That’s not acceptable of course but it’s actually an upward trend over years of 44-47 Fen%. Did I mention the Habs have been a brutal even strength team for a very long time?  So, even though the Canadiens are supposedly the 5th best team in the NHL for having puck possession, they’re actually getting out chanced where most of the goals are scored, especially on the road. It’s just not as bad as before so hey, progress, right?

Let’s look at how the Habs are doing with those limited offensive chances. They’re averaging 20.7 unblocked shot attempts beyond 25 feet and have a 4.3 SH%, which is in the ballpark of the league average on both counts, while the power play generates 3.6 attempts and a 8.8 SH%. from distance. Within 25 feet on the power play the Habs are shooting 17.3% on 2.1 attempts per game. Solid shooting percentages undermined by being 25th in total power play time, which is much more of a problem than mere PP%.

The inside game for the Habs is really telling. Overall, the Habs have a very pedestrian 14.7 SH% within 25 feet 5v5 on 11.1 attempts but the Home/Road splits are simply frightening. The Habs are very good at home with a 17.7 SH% but are a miserable 10.8% on the road. The road chances are barely average but the SH% has been pathetic. Anyone wondering how the Habs are 29th in road goals can look right there for the problem. So, how the hell can they be 17-8-1 on the road while shooting 10.8% 5v5 in tight? Two words: Carey Price.

While Price hasn’t needed to be elite on home ice, just excellent where he’s been downright Hart Trophy worthy on the road. Overall, opponents are shooting just 2.63% on the Habs from distance 5v5 while Carey Price has been beaten on just 2.37% of all 5v5 unblocked shots beyond 25 feet, including a stretch of 14 home games where he was beaten just once from distance. But wait, there’s more.

Unsustainable?  Yes, but the question is what gives first? Carey Price stonewalling the opposition on the road while the Habs are being out chanced every night 5v5 in tight, or the Habs offense doing something about that pathetic 10.8 SH% when opponents can line match on the road? Considering the Habs shot 16.2% in tight 5v5 on the road last season and just 13.9% at home, at least some improvement is overdue so a little movement on both is likely.

Still, barring a major trade or patience for the likes of Nikita Scherbak and maybe a Michael McCarron, the Habs inside game 5v5 remains their greatest weakness, just not as bad as its been for a very long time. But until that changes, the Montreal Canadiens had better finish the regular season with home ice advantage in the playoffs because "Anything can happen in the Playoffs" is more wishful thinking than anything tangible.

So long as Marc Bergevin keeps working to improve the Habs 5v5 game, and there’s still a lot of work to be done, it’s hard to complain too much, given where this organization is coming from. True contender talk will hinge on the Habs getting closer to that +.45 EV scoring differential, where "Anything can happen in the Playoffs" actually means something.

In my next story, I'll look at the Habs forwards individually.