Drafting NHL players – Who really does it better?

ROUNDS 2 to 7 - The true measure of drafting

There's a reason why all the mock NHL drafts you see don't speculate beyond the first round and why scouting services only offer paid access to their lists. The consensus over who should be taken gets murky very quickly once you're about half-way through the second round. A very good reason why so many eagerly await the bible that is Bob McKenzie's TSN draft guide to analyze his top 60 prospects and honourable mentions.

Rounds 2 through 7 are the meat and potato rounds where a team can make up for poor draft position or squandered opportunities in round 1. It also shows which teams are truly committed to scouting and drafting to build from within, which teams sink or swim on their high first round picks and which teams are forced to compensate for putrid drafting with trades and free agent acquisitions.

Drafting has certainly become more important in the cap era, primarily because the middle class of expensive, veteran players has been purged since the lockout. The result has created an increasing reliance on affordable, younger players to create the cap space needed to afford a small nucleus of highly paid players, usually no more than 3-5 at any one time. The primary difference between NHL clubs these days is the quality of those affordable players and managing the cap to keep them as long as possible.

So, what are the odds a team faces at the draft as they attempt to mine NHL calibre players outside of round one, the most heavily scouted and analysed round of the draft? The only way to properly analyse and criticize a team is to compare them to the rest and then again against the league average. Failing to do so is lazy and convenient and for many, their preconceptions have become fact. After all, all one needs to do is invoke the name “Detroit” to make their case that their criticism of a team’s draft performance is accurate and justified. But is it?

The true measure of a team’s commitment to scouting and their drafting finesse is their ability to produce NHL calibre players when the odds of finding one most years falls dramatically after the top 20. Let’s start with the league average success rate in all seven rounds to see what the odds are throughout draft:


Was anyone else surprised to see that 73% of second round draft picks actually fail to make the NHL with any measure of success? The criteria being 160 games, the minimum number of games needed to qualify for an NHL pension. What these numbers reveal is that bashing an organization for developing just half their second round picks is completely unjustified. In fact, they should be praised for managing such a feat. The drop-off in round 3 to 22% wasn’t as significant as one might expect though a 78% failure rate is still higher than the preconception I had going into this study. The real surprise for me was the relatively equal chances of drafting NHL calibre players from rounds 4 through 7. There’s a slight dip in round 5 to 9% which equates to 15 fewer prospects making it but overall, one can see just how difficult it is to successfully scout and draft 18 year olds.

So, how do the teams compare to one another? To analyse 2,344 draft picks fairly from rounds 2 through 7, I developed a weighted scoring system to reflect the perceived trade value of higher round picks; Teams were awarded a multiple for each pick that became a successful NHL player; 7 points for a second round pick, 6 for a third, 5 for a fourth, 4 for a fifth, 3 for a sixth and 2 for a seventh round pick to produce a point total. Next I calculated the success rate of the total number of drafting opportunities each team had and then multiplied the two results to generate an overall score. I believe this formula fairly ranks a team’s scouting ability and its commitment, or lack thereof, to the draft:

ROUNDS 2 to 7 – How teams did with their picks 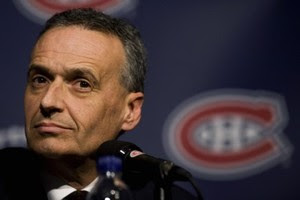 Is anyone else surprised to see that the Montreal Canadiens are actually the 3rd best team in the league at scouting and drafting NHL calibre players outside the first round? Safe to say, it’s better than what most Habs fans would have thought. It also blows away any arguments that the Montreal Canadiens have suffered by not drafting enough Europeans. Of course, the Habs should be more committed to scouting the European leagues, especially Sweden and Finland but the fact remains, only 2 other teams have produced more NHL players from the leagues they focused on. Having said that, if GM Pierre Gauthier decides to replace the European scouts he fired, I suggest Trevor Timmins use rounds 4 and 5 to target their recommendations since that's a drafting dead-zone for the Habs.

Some might argue that this ranking system doesn’t reward teams who made excellent late round selections. As I mentioned in Part 1 of this study, this is an analysis of which teams are best able to scout and draft more NHL calibre players. The Detroit Red Wings, a team that I was completely expecting to see in the upper echelon has actually been very average after the second round of the draft. No question the few selections they did make turned out to be home runs, thanks almost entirely to their European scouting. Overall however, the Wings haven’t been as good as their reputation which is clearly demonstrated in their poor success rate in rounds 4 to 7.

Kudos to the Buffalo Sabres and Colorado Avalanche, far and away the league’s best at mining NHL talent in rounds 2 through 7, two teams that also ranked in the top 10 in round 1. The Pittsburgh Penguins built a Cup contender, not just with a Tank Nation tactic that spanned 5 years (2002-2006) but with rock solid scouting and drafting outside the first round. The polar opposite of the Penguins is the Washington Capitals, a team that tanked for 4 years (2004-2007) and has relied almost exclusively on their stockpile of first round picks to build a contender. One can only imagine what the team might be capable of if their drafting in rounds 2 through 7 were anything but putrid.

The Tampa Bay Lightning have bobbed like an apple in the standings, tanking three times in two year increments (1997-1998, 2000-2001 and 2008-2009) the past 12 years, failing on almost half their first round selections and following it up with the second worse scouting in the league in the later rounds. The only other organizations that rank with recent expansion teams are the Phoenix Coyotes and Toronto Maple Leafs, two teams that have been justly criticized over the years for poor drafting and gross mismanagement.

The Stanley Cup Champions, the Chicago Blackhawks ranked in the bottom third in rounds 1 and 2 through 7 yet managed to develop 10 draft picks that played on their Cup winning team. A two year tanking in 2006 and 2007 are too recent to be included in this study but they certainly deserve mention. Selecting Jonathan Toews 3rd overall in 2006 and following it up by winning the draft lottery in 2007 to select Patrick Kane 1st overall demonstrates how a post cap era team can build a contender if they have the scouting and drafting to buttress just a few top picks with solid selections after round 1. A team that will have to be partially dismantled one year earlier than planned because the previous GM, Dale Tallon used snail mail to send out qualifying offers to Versteeg, Barker, Eager, Fraser, Johnson and Brouwer instead of a courier.

There's no question a team can remain a consistent playoff contender if their able to produce a steady flow of prospects to backfill the roster as the cap forces yearly decisions on who must eventually be traded and when. What’s needed to become a serious Cup contender is just one or two top 5 draft picks in short order to augment a commitment to scouting and drafting.

And this is where solid drafting teams like the Montreal Canadiens have become victims of their own success, in spite of below average first round selections. Their commitment to scouting has greatly limited their opportunities to draft in the top 10, let alone the top 5 and a lottery pick. Excluding the Crosby draft in 2005, the Habs haven’t had a top 5 pick based on team performance since 1984.

The Boston Bruins demonstrated a workaround for this catch-22 by trading Phil Kessel for what they thought at the time would be as least a top 10 pick this year with a legitimate shot at a lottery pick, a second round pick and what should be a solid first round pick next year. Sam Pollock would be proud as teams who trade away their top 5 picks prior to the draft tend to regret them as the Toronto Maple Leafs surely will for years to come.

At the very least, I hope this study sparks some discussion and provides some insight over how contenders are built and which teams are really better at drafting NHL players.