Drafting NHL players – Who really does it better?

Round 1 - Do NHL teams really benefit from draft position? 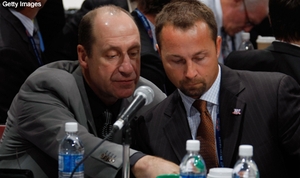 It’s said that there are lies, damned lies, and statistics. And then there’s the NHL Draft. Over the years we’ve all heard stories about which organizations are supposedly good at scouting and drafting NHL calibre players and which organizations are supposedly so bad that they constantly waste their picks or trade them away. Which teams really deserve credit and who should get anything but? Even before Habs GM Pierre Gauthier fired 6 Scouts, there’s been near-constant debate over the draft performance of the Montreal Canadiens, a topic that fans of the other 29 NHL teams also hotly “discuss” in their respective team forums on a near-daily basis. In Montreal though, we call that a Tuesday.

Part of that debate of course is “Tank Nation”. Fans who believe in the theory that the best way to build a true competitor is to sell-off and purposely try to be a bottom feeder for 3-5 years in order to stockpile early first round draft picks, ideally lottery picks. Indeed this tactic certainly worked in the past, so well in fact that the NHL finally followed the NBA and introduced the draft lottery in 1995. But is Tank Nation still a viable way to build a winner in the draft lottery era or can it be done via shrewd scouting and drafting to consistently remain competitive? How can one truly judge a team’s ability or commitment to the draft and more specifically, which organizations are historically good at scouting and drafting and which ones are just beneficiaries of a run on top picks? And of those, who has squandered those opportunities, either by poor selection or mismanagement by trading those prospects away.

In an effort to get some answers, I decided to analyse the NHL Draft starting from the last time the Montreal Canadiens won the Stanley Cup in 1993 through to the draft class of 2005. Using data from more recent draft years would skew the numbers as many of them are NCAA or European players who haven’t yet had the opportunity to play in the NHL long enough.

So, what do I consider a “successful” draft pick to be? Everyone has their own hotly defended opinion of course but my criteria is not merely defined by a player who manages to play at least one NHL game. And the only way to properly judge the drafting of the Montreal Canadiens is to compare them to the rest of the league which means that fans of other teams should find this interesting as well.

The bar I set is modest yet the numbers are startling. The criteria used to crunch the numbers is this; a forward or defenseman who’s played at least 160 NHL games, 100 GP for 2005 picks and goalies who’ve played at least 80 games or 40GP for 2005 picks. In the case of recent draft picks that came within 10% of the cut-off, I included them if they were still playing in the NHL. Overall, the criteria used for this study works out to be just a third of the average career length (about 5.5 years as of 2005/06) of an NHL player today. With such modest requirements one would tend to think the percentage chance of drafting NHL calibre players would be on the high end but they’re anything but.

Before I go further I must stress that is an analysis of how teams scout and draft over the long term, not how they manage or mismanage those picks after the fact. I’ll start with the league average success rate in round 1 and then in part two of this study, I’ll examine rounds 2 through 7 where a team’s scouting and drafting finesse matters most.

Now, the only way I could break down the statistics fairly was to separate round 1 from the rest of the draft, looking at the average draft position of teams, the success rate of those picks as a whole and then in increments of 10 and 5. It’s the only round where draft position would or should make the biggest difference in how successful teams are at drafting.

Looking at 365 first round draft picks from 1993 through to 2005 provides what I believe is a fair sample size but there’s the issue that some teams weren’t even in the NHL back in 1993. Those teams will be marked with an (*) to explain the fewer picks and skewed percentages relative to the other teams but the success rate of those picks will still be displayed so readers can see how they fared.

To start with, I’ll begin with the odds of drafting NHL calibre players in the first round. The league average indicates that just 65% of first round draft picks ever make it to the NHL with any measure of success. Here’s a breakdown of the first round:

ROUND 1 – Draft order and success rate in increments of 10


As you can see, the success rate of top 10 picks is 83% (108/130) which is a result many would expect to see but what caught my eye are picks 11-30 where the odds of drafting an NHL calibre player was 56% (131/235) or not much better than a coin flip. In other words, a team picking outside the top ten who manages to successfully develop just over half their first round draft picks is actually average, not brutal as many fans tend to think.Now, let’s take a closer look at the first round in increments of 5 to get a better look at how draft position relates to success:

ROUND 1 – Draft order and success rate in increments of 5


Here we see some clarity. The top 5 is as one would expect where a team could bring back TSN's Maggie the monkey to make their pick, knowing they have a 95% chance (62/65) of drafting a useful NHL player. Of course, some picks are better than others but you get the idea. From picks 6 to 10 however, I was surprised to see a near 30% (46/65) failure rate so soon in the draft. Another surprise was the realization that picking in the 11-20 range is a true grey zone where every team has a 55% (72/130) chance. There’s a bump from picks 21-25 that show a 63% (41/65) chance which equates to 5 more players making it in the NHL from 1993-2005. Not a relatively large variation but I originally thought this was a result of European prospects slipping to the latter half of the first round but the majority are actually from the CHL. The drop in picks 26-30 to just 45% (18/40) strongly demonstrates how shallow the talent pool is most years.

Now, let’s take a look at how teams actually drafted in the first round. I wanted to see how many successful drafts picks teams made compared to how many picks they had and where they tended to draft them over time. Essentially, I was interested in how teams did relative to their draft position to see who drafted well and who should have.

ROUND 1 Success – How teams did with their picks


On average, the Montreal Canadiens have picked out of the 14 spot (15 if we exclude the Crosby lottery year) and have actually drafted better than the league average success rate relative to where they picked. Overall however, the Habs have been purely average in the first round at scouting and drafting NHL talent when compared to the rest of the league. They haven’t been as bad as many might think in terms of pure numbers but to be certain, there's room for improvement which is something Habs fans already knew.

The biggest criticism, entirely justified is that the two best offensive players the Montreal Canadiens have drafted since selecting Saku Koivu back in 1993 are Andrei Kostitsyn, taken 10th overall in 2003 who's career average so far is a piss-poor 0.57 PPG and Chris Higgins, taken 14th overall in 2002 who's managed a paltry 0.48 PPG. So, for the Montreal Canadiens first round picks from 1993 to 2005, those that made it, barely did so. And to make matters worse, the one offensive defenceman the Habs drafted in the first round who became a solid player was Ron Hainsey, taken 13th overall in 2000 who they then proceeded to place on waivers, losing him to Columbus after just 32 games with the Canadiens. Lastly, you know the Habs drafting in the first round is bad when Brad Brown, taken 18th overall in 1994 is considered a "success".

In a study that’s designed to examine whose drafted well in spite of their pick position and who should have, there are some surprises. First off, kudos to the Philadelphia Flyers for producing 9 NHL players despite having just 1 top 10 pick since 1993. A classic example of a team who didn’t use the Tank Nation technique to build a competitive team. The New York Islanders however are a prime example of gross mismanagement. Had their management group, especially under Mike Milbury decided to keep their picks and allowed them to fully develop, current GM Garth Snow wouldn’t have such a large hole to dig the team out of. In fact, they'd most likely have had a few deep runs in the playoffs. The Washington Capitals, even with sub-par drafting success showed just what hording first round picks can do for a team that’s committed to the draft.

On the flip side, the management of the New York Rangers and Edmonton Oilers should be ashamed of themselves for squandering their first round picks in such grand fashion. To score in the range of teams who’ve only been drafting since 1998... or more recently, well that takes effort. The Tampa Bay Lightning are the poster child of Tank Nation, relying almost exclusively on top 10 picks to build their team but unlike Anaheim, have produced just half the players. Surprisingly, Detroit scores badly but with just 3 of 7 first round picks since 1993, which shows that some teams use their picks to try and sustain themselves as a Cup contender... and an indicator that their farm system is depleted.

In Part 2 of my study I’ll be looking at rounds 2 through 7, to see just how good or bad teams are at drafting NHL calibre players and who relies almost entirely on those top 10 picks. Which teams are consistently able to mine NHL talent when high first round picks aren’t available and which teams who benefited from top 10 picks were unable to follow it up in the meat and potato rounds.