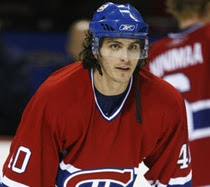 The Montreal Canadiens General Manager, Bob Gainey, announced Wednesday that centre Maxim Lapierre has been assigned to the Hamilton Bulldogs of the American Hockey League.

Lapierre, 21, played in 13 games with the Canadiens so far this season, collecting three goals and two assists, with six penalty minutes and a plus/minus rating of plus-3. Lapierre joined the Bulldogs on Wednesday who play their next game on Friday January 26 against the San Antonio Rampage, in Hamilton.

So what if anything does this move mean? The likely scenario is that Steve Begin is about to come off Injured Reserve and will play on the 4th line between Mark Streit and Alexander Perezhogin.

If Begin is not ready to return then it can only mean a trade will be announced by Bob Gainey before the Habs play in Toronto on Saturday. Even in the Cap-conscious world of the new NHL you don’t risk sending a player down to play in the minors to save just 24 hours of Cap space.

With the Canadiens carrying 8 healthy defensemen it’s been quite telling to see 2 of them, Mark Streit and Mathieu Dandenault spending time on the 4th line, beating out wingers Garth Murray and Aaron Downey for playing time. Both Murray and Downey were expected to play their part, along with Steve Begin as an “energy line” this season but Begin has been on Injured Reserve with a rib injury since December 12th and Murray was eventually waived by the club, going unclaimed.

Aaron Downey has only played in just 4 of the Habs last 13 games since Donald Brashear embarrassed him in a fight on December 27th during a game against Washington. When he has dressed, Downey is averaging over 6 minutes a game. When you can’t perform your expected role and get beat out for playing time by 2 defensemen your days are clearly numbered and that’s why the Lapierre assignment to Hamilton is raising eyebrows about a possible trade if Begin isn’t ready to come off Injured Reserve.

One player that isn’t likely to get traded is Tomas Plekanec, even though he hasn’t performed as expected since he was handed the 2nd line center position to start the season. Radek Bonk is an UFA and due to Cap issues and the need to focus on resigning Sheldon Souray, Andrei Markov and Craig Rivet it’s believed that Plekanec will take over as the 3rd line checking Center next season. All those I just mentioned aren’t likely to be traded because teams don’t move key players when their preparing for a playoff drive.

The expectation is that in his search for an upgrade at Center, Bob Gainey will also try to add a player with size and “Moxie” to add more character and leadership ability to the team. Someone with the personality traits of a Shane Doan or Brendan Shanahan would be a welcome addition. We’ll know a lot more by Friday at the latest.