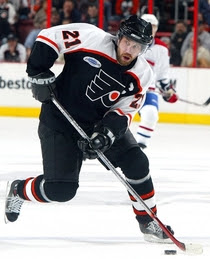 Not until he’s finally traded that is. Montreal is consistently on the short list of teams mentioned as actively pursuing Peter Forsberg before the February 27th trade deadline though the players supposedly involved really highlight how much pumping and sheer guesswork is circulating as sourced information. A prime reason for that is the interesting habit of online media, print journalists and bloggers pointing to each other’s speculation as valid information coming from “insiders”.

So how about we look at it from a practical point of view? If your Flyers GM Paul Holmgren your looking to the future and that means young players, minor-league prospects or future draft picks. If you’re a GM looking for that final piece to solidify a playoff drive you not looking to move a roster player for fear of upsetting the chemistry that got you there. That includes players who are due to become Unrestricted Free Agents.

From a financial point of view a team like Montreal needs to consider Forsberg salary which is $5.75 Million this season or about $958,000 per month to rent since he’ll become an UFA at season’s end. This is of course important for teams hovering near the Cap maximum.

If Holmgren is to get the best possible deal for Forsberg he needs him healthy and so far the new skate seems to be helping some. In the past 9 games Forsberg has tallied 1 goal and 11 assists though he rarely shoots the puck anymore averaging just 1.5 shots per game. Not exactly the ideal Center for two puck carriers like Alexei Kovalev and Sergei Samsonov.

Would Bob Gainey trade a solid non-roster prospect like Andrei Kostsitsyn, Mikhail Grabovsky or Kyle Chipchura for Peter Forsberg who, even if he somehow managed to stay healthy wouldn’t be a good fit on the second line in the first place? I seriously doubt it and expect Detroit and the New York Rangers to be the serious contenders for his services. The only way Montreal would even consider Forsberg would be if they could trade Samsonov to another team first.