With the 1st quarter of the Canadiens 2013-14 season now in the books, it’s time to stand back and evaluate what’s working and what isn’t to better understand why the Habs are currently sitting 5th in the Atlantic and clinging to the 2nd Wild Card spot.

Only Minnesota, Boston and Los Angeles have given up fewer even strength goals against per game than the Montreal Canadiens, thanks in large part to a system that’s been successful limiting 5v5 red-zone chances within 25 feet. Let’s look at the league averages and then see how the Habs stack up.

To date, 67.9% of all 5v5 goals are scored in the red zone with teams averaging 33.6% of their total unblocked shot attempts coming in-close. That’s one third of 5v5 shots generating two-thirds of the offense so yes, shot distance matters.

Excluding blocks and empty net situations, teams are averaging 10.8 5v5 zed zone shot attempts per game and scoring at a rate of 14.9%. As for defensive net presence and rebound control, 18.2% of those goals came within 3 seconds of the goaltender making an initial save.

So, how did the Montreal Canadiens compare to those metrics through Q1? The Habs limited opponents to 60.7% red zone goals 5v5; the result of limiting in-close shots to 32.3% of the total for an average of 10.2 red-zone shots per game. All in, opponents shot 10.6% with 17.9% of their 5v5 red-zone goals coming off rebounds.

What I see is a team with a healthy, functional defensive system that’s done a good job boxing teams out 5v5. They’re allowing more perimeter shots but fewer quality shots and prime rebounds in-close. That’s a fine blend of disciplined forwards, defensemen and goaltenders working together to limit the opposition so it’s hard to complain about Therrien’s defensive coaching when the players are executing the system well 5v5.

So long as they continue to out-chance the opposition in-close, you won’t see me yelling that the sky is falling over Therrien’s bench management or Bergevin’s quota choices; mandated from ownership or not. Given the overall picture, fretting over the 4th line and 3rd D pairings is a distraction game, given both are locks to be -50% Corsi on every team but legit final four contenders. So long as they aren’t bleeding goals (they aren’t) there are bigger fish to fry.

Which leads me to the real problem…

You can lead a horse to water but you can’t make them drink it. Overall, solid coaching and player discipline to date has allowed the Habs to keep out-chancing the opposition in-close; an aspect of the Habs game that’s been a major problem for the club for most of the last 15 years. Through Q1, we’re still seeing the system sea-change that Bergevin and Therrien brought to Montreal; that winning hockey ultimately comes from strong even strength play in-close, not perimeter play and special teams.

While the Canadiens are generating 11.8 5v5 red-zone shot attempts per game, a healthy 36.4% of their total, the Habs are scoring on just 11.2% of their shots on net… in a league averaging 14.9% and where Cup contenders shoot north of 18.0%. As for capitalizing on rebound chances in the crease, the Habs are below average there as well, scoring just 16% of their 5v5 goals off puck scrambles.

The opportunities are there to score in-close so the lack of offense isn’t a coaching problem; it’s too many players not executing. And by executing, I mean hitting the damn net. Below is a chart to illustrate their shooting woes 5v5; both inside and outside of 25 feet, excluding empty net situations: 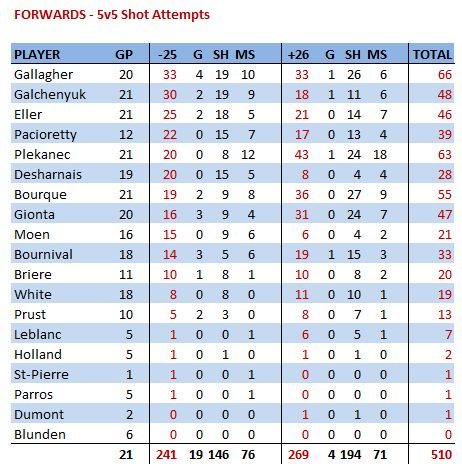 Those following me on Twitter know I’ve been going on about red-zone missed shots for a while now and this chart does a good job visualizing the concerns. The 1st thing that jumps out from the forward group is Gallagher and Galchenyuk; two sophomores leading the Montreal Canadiens in 5v5 red-zone shot attempts with young Lars Eller in third. That’s an entire line that was expected to provide secondary offense, leading the team in net drive and actual pucks on net.

Ideally, you want to see shooters missing in-close on about one third of their attempts, excluding blocks. Of the red-zone misses for Gally and Chucky; a healthy percentage are from tip attempts; meaning they were where they needed to be for rebound chances.

The forwards are, for the most part, where they need to be and as a result, the Habs are still out-chancing the opposition in the red-zone 5v5. That’s a good thing. The bad thing is that only six teams miss the net more than the Habs do and through Q1, that miss rate is being compounded by the forwards shooting wide on prime shot attempts in-close.

To hammer the point home a bit more, only two NHL players have missed the net 5v5 more than Tomas Plekanec has so far this season and it’s having a drag effect on Brian Gionta and to a lesser extent Rene Bourque and Michael Bournival, his part-time left wingers through Q1.

That said, I’d rather see a player miss the net in-close than not being there in the first place for the attempt. That’s why I’m not overly concerned yet about Max Pacioretty. He’s shooting from closer range than years past and as a result, is missing the net less. A notoriously streaky player with 10 and 11 game goal droughts the last two years, the signs are there for his drought to end once he stops firing pucks into team logos. Beyond Eller however, the other centers have all struggled badly distributing pucks and creating rebound opportunities.

Which brings me to David Desharnais. On the surface, just five red-zone misses with 15 pucks on net looks okay but most fans have seen the quality of those shots. Desharnais has a bad shot and worse finish with an unhealthy dependence on his ass, chest and forehead to score goals in-close. Deflections are why he sports a 14% career shooting percentage and in a league of adjustments, DD hasn’t been able to develop the strength or skills to compete for crease position with the composure needed to generate quality chances at loose pucks like Gallagher; who I might add completely outclassed Desharnais when the going got tough in-close during the playoffs last year vs. Ottawa.

It’s good that DD hasn’t given up going to the net but he isn’t a top 2C. And with a very limited defensive game, he never was. Few teams can move a Desharnais into the bottom 6 and still provide the minutes and strong, offensive wingers needed to succeed so the best hope is that he rebounds enough to gain at least some trade value. And yes, I’d like to think Therrien putting him on a line in practice with Pacioretty and Gallagher is an attempt at that. Meanwhile, the Plekanec line gets the role, yet again, of shutting down the opposition’s best every night while being expected to generate primary offense.

At least Gallagher showed good chemistry with Pacioretty last year so if the sophomore can turn the two around, I’m sure some will be tempted to shunt the credit to Desharnais for his past “chemistry” with Patch and glaze over why Therrien moved Gallagher onto the line in the 1st place. As for the line juggling to get others going, well… that’s been in the NHL for as long as I can remember. I’ve always felt Desharnais and Briere was an either/or situation for the Habs so we’ll see how that plays out over the next 20 games.

Since a lot of 5v5 red-zone offense can be generated from the back-end, utilizing perimeter shots with forwards driving the net for tips, deflections and rebounds, let’s take a look at the Habs defensemen: 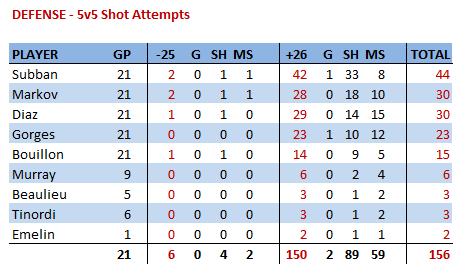 Two things immediately jump off that chart. First off, remember when everyone complained about how wild P.K. Subban was with his shot? Two off-seasons working to change his golf-swing into a more compact shot has certainly paid dividends 5v5; demonstrated by 44 shot attempts and just 8 misses beyond 25 feet. Meanwhile, Diaz and Gorges miss the net more than they hit it. Yeah, that’s not helping at all.

Why all the fuss about generating in-close shots? Take a look at those charts again and tally up how many 5v5 goals the Habs have actually scored beyond 25 feet through 21 games. That's right, SIX goals. Goaltenders on average stop 96% of all 5v5 shots on net beyond 25 feet so capitalizing on the in-close chances you do get is critical.

So there we have it. Outside of the majority of the team’s veteran core missing the side of the barn much too often, the offensive and defensive fundamentals are still sound enough to keep the Canadiens in the Wild Card mix. If they somehow go another 10-20 games with Storm Trooper shot accuracy, then yes, sky will indeed be falling.