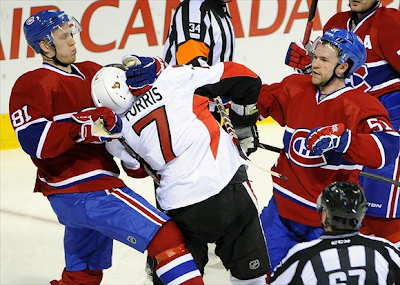 It’s difficult to talk about who’s a better top 2 center for the Montreal Canadiens; David Desharnais or Lars Eller without being labelled a hater of one or both. Fact of the matter is, I’ve long stated that David Desharnais isn’t suited to be a top 2 center on an upper echelon team and fortunately for Habs fans, he isn’t being paid like Marc Bergevin thinks he is.

$3.5 million AAV over the next 4 years is high-end, 3rd line coin and if he eventually moves off the top 2 lines, 40-45 point seasons would be fair value for that investment. If he stays where he is? Forget the predictions of 60+ point seasons and expect 50.

For Lars Eller, can he play well enough, consistently enough to force Michel Therrien into a position where it’s in everyone’s best interest (winning hockey games) to make a change. Say what you will about David Desharnais but he’s now an established hockey player in the NHL and Montreal in particular. Eller came into the 2012-13 season with 28 points as a high water mark on his young career. I projected a breakout year of 35+ points or 20+ over 48 games to be enough to start the conversation on whether he was ready to challenge Desharnais for his top 2 center job and here we are.

Once a player solidifies (a 60 point season will do that) his position, coaches will do almost anything to buy time for a struggling player to turn his game around. And David Desharnais has surely struggled. Just on power play time alone dating back to last season, Desharnais has played 58 games on the 1st or 2nd unit and has ZERO goals, TWO primary assists and just five seconds to show for it. That’s why I believe 50 point seasons, not a string of 60+ are more likely if he stays on the top 2 lines.

So, with the brass ring within reach, what has Lars Eller done so far this season to force Michel Therrien into making a change and hand Desharnais’s responsibilities, offensive zone starts and power play minutes over to him? Well for starters, a recent 11 and early 10 game stretch without a goal, in a 48 game season, and just 3 points in the 3rd quarter isn't exactly a huge leap towards that ring.

Even with his limited O-zone starts and limited power play time, Eller has generated enough offense, streaky as it may be, to start the conversation about being a 2C. A topic most Habs fans have been waiting to have since the Jaro Halak trade. Thing is, faceoff ability and defensive assignments also matter to play top 2 line minutes.

The fancy stats don't really hold the tale of the tape so I decided to take a look at their faceoff assignments over the last 15 games and see how Eller stacks up against Desharnais with Plekanec thrown in for comparison:

Want to fully understand why the Habs claimed Jeff Halpern off waivers to help boost the PK and defensive depth down the middle? Eller’s piss-poor 39.4% on D-zone draws and just 43.7% overall the last 15 games is why.

A fading FO% with 2 long scoring slumps spanning 21 games isn’t what I call consistency in Eller’s game. Blind cheerleaders may claim it’s a matter of Habs management or Michel Therrien playing favorites but from where I’m sitting, Eller simply hasn’t done enough, consistently enough… at least not yet, to grab the brass ring from David Desharnais.

Since we’re talking about the center position, let’s do a couple apple-to-apple comparisons on faceoffs. People tend to fixate on FO% as if winning 10 of 20 against someone like Patrice Bergeron is the same thing as winning 5 of 10 against Nazem Kadri. When it comes to faceoff percentage, quality of competition has an impact if you want to play a bigger role because the assignments get harder.

I’ve taken 25 centers from the Eastern conference who’ve taken the most faceoffs this season and compared how they did they did in all 3 zones against Eller, Desharnais and Plekanec. Teams who rely on specific players to take most of the draws do so for both offensive and shutdown purposes so it should provide a good balance to look at:

First impression? The next time someone talks about trading Tomas Plekanec, just tell them to shut up. Overall, Plekanec struggles slightly against shutdown centers on faceoffs in the O-zone but 58% against the other teams’ offensive best in his own end is absolutely dominant.

On the season, Plekanec is winning 59.8% of his D-zone draws so while he’s just 1.1% better than David Desharnais on overall FO%, he’s a world ahead when quality of competition is factored in… and that’s why Pleks has taken 150 more draws than anyone else on the team and almost 200 more against the NHL's bigger fish. Blind cheerleaders and fanboys may like simplistic FO% to boost their arguments but coaches make decisions on based on a much deeper level of understanding.

We see further evidence that David Desharnais shouldn’t be a top 2 center but has Lars Eller demonstrated that he’s clearly a better option to force change? No. Eller’s O-zone faceoff sample against the best in the East is small but he’s 55/109 (50.9%) overall on the year, suggesting that 53.3% against the top 25 would slide under 50%, given the time.

In the D-zone, Eller is actually worse than Desharnais against better competition and that’s reflected in their season stats as well where DD is 64/133 (51.9%) vs. Eller’s 81/171 (47.4%). Yet another reminder why the Habs claimed Jeff Halpern off waivers.

So, in a head-to head matchup against the same faceoff men in the Eastern conference, Eller has failed, at least so far, to demonstrate that he’s a better option at a time when David Desharnais is struggling. Sucking slightly less (0.6%) on overall faceoff assignments isn’t usually how center position jobs are won.

Now, let’s drill even deeper and see how they stack up against the 12 best point producers from the batch of 25 who’ve taken the most draws in the East. Those looking to see if Tomas Plekanec is ripe for replacement will be bitterly disappointed. 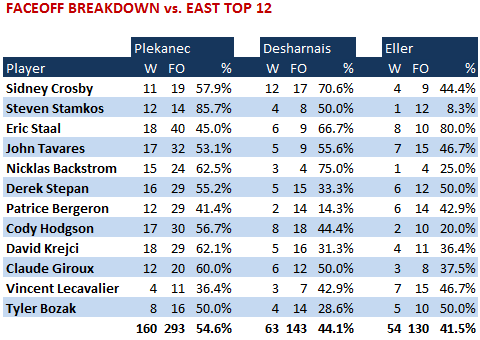 Plekanec demonstrates yet again that while his season FO% is only slightly better than Desharnais and marginally better than Eller, his ability to shut down the best offensive centers in the Eastern conference is on another level. Fancy stat folk like to believe, as do I, that mere FO% last little impact deciding hockey games but when you drill down into FO Quality of Competition, there is an impact on possession. They tend to see faceoffs being more about luck than skill but when you compare apples to apples, skill matters most.

For Lars Eller, again we see why Michel Therrien has been reluctant to replace David Desharnais. Streaky offense, poor faceoff work the last 15 games and no statement being made, at least so far this season, against quality centers in the East.

That's why I don't believe there's a conspiracy or favorites being played here. Lars Eller simply hasn’t done enough yet to force the Habs into believing he’s a better top 2 center than David Desharnais. Or DD still hasn't sucked enough. Take your pick. That time may come and I hope it does for Eller but for now, it's helps to understand why it hasn't happened. Yet.