Why the Habs claimed Jeff Halpern off waivers 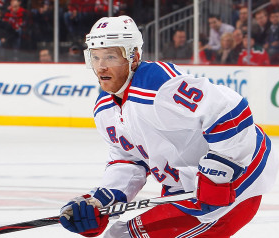 Jeff Halpern was claimed off waivers from the New York Rangers this past Saturday for one reason; do a better job than Lars Eller and Ryan White centering the 2nd PK unit and stop the bleeding that is the Habs 18th ranked penalty kill.

Halpern played 60:54short handed minutes with the Rangers, 2nd among forwards and was on ice for 7 power play goals against. By comparison, Tomas Plekanec, the Habs best penalty killer has played 68:30 and has been on for 6 5v4 and 2 5v3 power play goals against. Meanwhile, Lars Eller has given up 7 goals in 43:58 PK mins and Ryan White has been brutal, for 4 in 22:03.

So, for the remainder of a 700k contract, Marc Bergevin acquired an affordable 4th line and 2nd unit PK center who can contribute about 9:30 minutes a night without losing an asset or chewing up cap space that’ll be needed to cover for the loss of Rene Bourque and/or Raphael Diaz.

Halpern’s days of contributing offense are long gone but that’s hardly a downgrade from Ryan White who just got shunted to the precipice of having NHL employment in Montreal. Fortunately, with the Habs being far more aggressive on the forecheck, the weak PK hasn’t hurt them as it surely would have in the past.

Their +22 power play differential (PP-PK Opportunities) is the most in the league and their special teams goal differential is the 8th best in the NHL. So, while that 18th ranked PK running at just 80.0% looks bad, the impact isn’t. Not when you drill down from mere percentages in an era of declining power plays.