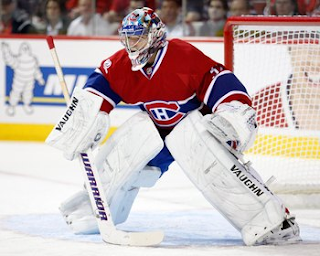 If Carey Price can hold his own and put up at least respectable numbers, the Montreal Canadiens should be healthy enough this season to finish as high as seventh in the East and make the playoffs.

If Price can't handle the pressure and blows up then the season will get real ugly, real fast as there's no Plan B to cover for his expected 60 starts, potentially dropping the Habs into Lottery pick territory by year's end. No pressure Carey.

That said, no team in the Eastern conference lost more impact man-games to injury last year than the Montreal Canadiens. Injuries cost the Habs 265 man-games but a conference high $9.4 Million in salary was sidelined. Up front, the team's top 2 lines were hit hard with the loss of Kostitsyn (23), Gionta (21), Cammalleri (17) and Pouliot (16) which impacted both the power-play and 5 on 5 scoring.

On Defence, the loss of Markov (37), O'Byrne (26) and Gill (14) forced the Habs to over-play the aging pair of Roman Hamrlik and Jaroslav Spacek, the latter of which played out of position on the right side all year. The early loss of Markov also forced the Canadiens to quickly sign Andre Bergeron to take regular shifts when he was more suited to be just a power-play specialist. This year that role will belong to Alexandre Picard, at least until Markov returns.

The off-season addition of P.K. Subban and Lars Eller will help both the breakout and 5 on 5 play while Subban will also provide a major boost to the powerplay, making him a legitimate Calder candidate. Eller will also get significant minutes on special teams where his defensive awareness and size will be a welcome addition.

With only a handful of teams in the East with rock-solid goaltending, a key for the Habs is to have their small forwards use their speed to draw more penalties. A lot more penalties. Last season, the Montreal Canadiens ranked dead last in powerplay opportunities but finished with the league's second best PP percentage. If they can even generate a middle of the pack average this season, it would translate to 50 additional powerplay opportunities and at least 10 more goals on the year. That alone could be worth a couple more wins.