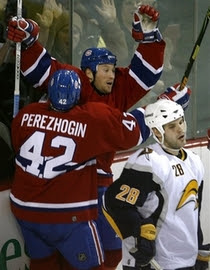 Had the Montreal Canadiens not hung on to beat Buffalo 4-3 this past Thursday the cries for change from fans and the media would surely have turned to screams. With the entire team fighting the flu their weakness in 5 on 5 situations could no longer be hidden by excellent Special Teams play and solid goaltending that had been carrying the team since the start of the season.

Heading into the All-Star game with back-to-back wins over Buffalo and Atlanta certainly reduced a lot of pressure on Bob Gainey to make a trade to try and stop the slide from a position of weakness. Now the Habs General Manager can relax a bit and wait for the right deal to present itself like it did last year when Jose Theodore and his hefty $5.5 Million contract were dumped into Colorado's lap in exchange for David Aebischer, saving the team $3.6 Million this season and a whopping $6 Million next year. Valuable Cap space that will be needed if the Canadiens are going to try and resign any combination of Souray, Markov, or Rivet.
Hab fans are hoping Gainey can make yet another shrewd move to bring in a front-line Center with size and soft hands to bring balance to the second line. If a Jose Theodore can be moved with a restrictive contract then it's broadly hoped that Sergei Samsonov, a major disappointment this season can be moved prior to the deadline to help clear salary against the Cap to free up the space needed to bring in an impact Center, a need that the flu bug exposed to all but the most casual fan.The All-Star game is always a watering hole for management teams and agents to gather to discuss possible trades and you can be sure Bob Gainey will be there as well in an attempt to find the right deal to help the team in the playoffs. The problem for all GMs is that the clear majority of them have very little Cap space left to swing a deal without including other players to balance out the salaries between the clubs.

At least the wins prior to the All-Star break buy some time for Gainey to work his magic.